We are going into our 3rd day of competition with many important matches coming up.

BC has done well this event.  But we will be finding out if we are doing well or just awesome this afternoon.

Kellan O'Neill and Nathan VonHagen will continue their run in the Boys Under 17 Bronze draw.  Both boys won their matches this morning and have another at 5:40 pm.  But like many of the afternoons for the past two days we expect to the courts to late...As I write this I am waiting for the 4:30 match to start...35 min late and counting.  (Aside, as I sit here and talk to the kids about their up coming matches I think I will have all 3 going on at the same time!)

Well next post to this page will have the results from the afternoons matches.

Our day started off with Kellan and Nathan playing in the 1st round of the Silver draw. 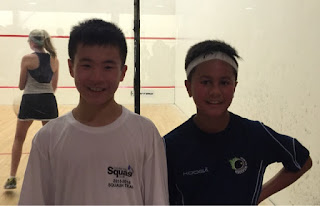 What an epic first round match!  Just goes to show that you need to prepare for every match. Apa took a 2 game lead over Christan, and they weren't easy games for the boys or for the coaches.  After the 1st 2 games Christian did settle down and started to move the ball around the court more effectively, giving Apa less opportunities. All the difference in the match. Apa was never able to achieve March ball in the third game. The 4th was a quick one for Christian and won 12-10 in the 5th. He moves on to play later today.

We had a rough afternoon from 4:00pm to 7:00pm with 3 of 4 players losing their matches.  It was not that we lost but were beaten by our opponents.  At an international competition it is going to be tough right form the start.  Grace and Christian have lost out of the QF this afternoon.  Matthew Henderson continues this evening to play the last of the BU 19 QF matches.  Currently it is 10:30pm and we have not started Matt's match yet.

Tomorrows schedule we have

Posted by Unknown at 9:24 AM No comments: 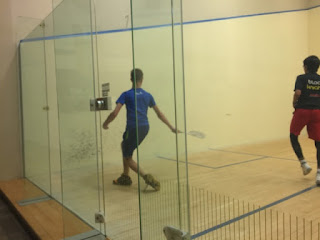 Day 1 and the we are 1 match deep.  Kellan O'Neill started our day with a loss the the 5/8 seed Darosham Khan from Ontario.  The word from the Ontario coaches, is that Darosham recently moved to Ontario from Pakistan.  Watching the match, Khan as smooth and quick on court.  He would continually move forward and cut off Kellan's drives.  Now it is into the consolations for Kellan and his second match Sunday morning at 8:00am! 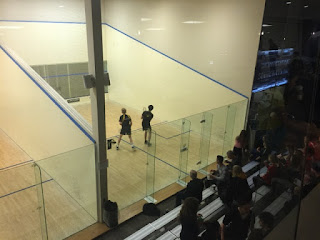 shot of the two exhibition courts.  Mike Johnson below watching one of his players. 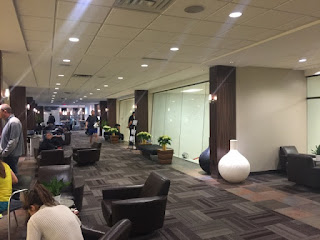 The above area looking down on the courts.

I will get some video clips up as the week goes on and more pics of the fabulous convention centre!

Gavin Maxwell beat Ricardo Toscano (GUA): 3-1.  Next match, tomorrow 4:05 pm with Mohanad Hekal (CAN) in the 3rd round

Less than 24 hrs and we will be flying to Toronto!  Our Flight leaves YYJ at 6:30am which means we make the early run to the airport to arrive at 5:30am.  Our top athletes fly 3 times per year traveling to tournaments each season.  This season some will be traveling on the U.S. Junior Open the following week.

Our players at the CJO this weekend are:
(below, Rachel, Grace, Gavin and Christian in their new CH t-shirts) 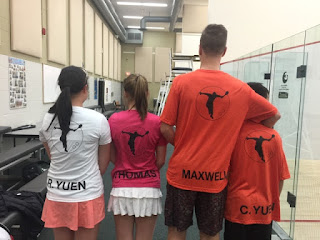 After arriving in YYZ we are not done our trip.  It is off to pick up our rental car and drive to Niagara-On-The-Lake.  This tournament is being hosted by White Oaks convention centre as it has been for decades!  But truly, I would not want it to be any where else.  The hotel rooms are in the same building as the squash / tennis facility.  Technically you could spend the 4 days not going outside once.

For many years there was nothing to do and no where to walk when you were at the CJO.  Surrounding the Conference Centre was nothing but fields and Highway.  In the past 2 years a massive factory outlet was constructed and now we can shop!  I wandered through the stores last year and there is not really that much there. (At least we have a change of scenery.

I will be posting through the day as we travel to Niagara-On-The-Lake.  So bookmark this blog and come back to see how we are doing! 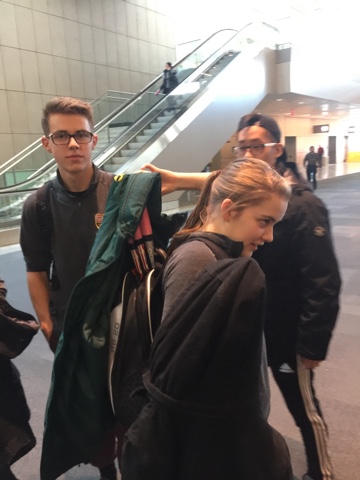